The new Kvarken ferry is now being promoted by MABA II project, funded by Interreg/Botnia-Atlantica, and the target is the same as the project partners set for the Midway Alignment project five years ago – to have a new ferry plying the Kvarken crossing in 2021, at the latest. At present, the project has engaged Inspira consultancy firm to develop a financing model suited for the project and its partners.

– Ever since we started the Midway project we have had the same timetable: having a preliminary funding decision and procurement process completed in 2017 and introducing the new ferry in traffic in 2020–2021. In order to keep this timetable, we need to have the overall financing ready this year and the procurement next year, says Mr Mathias Lindström, director of the Kvarken Council.

The project is now producing background materials and a ”business-case” with the help of Inspira Oy. The investigation is based on prior analyses carried out together with PBI Reserch Institute. Inspira will also assist in negotiations with the European Investment Bank EIB. 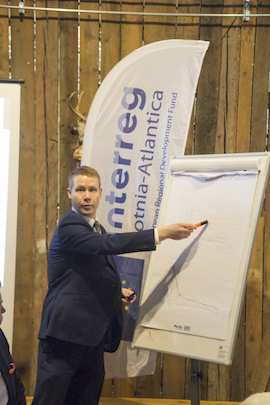 The consultancy firm Inspira is engaged as counsellors in financing models. Inspira’s deputy manager Jon Forssell in the photo

– In this project, our task is to prepare a financing model which optimates the use of capital to suit both the project and its partners. If we succeed in creating such a model it will be taken up in negotiations with EIB. The work that is now being carried out is, consequently, a fundamental and very important piece of the jigsaw puzzle, says Mr Jon Forssell, deputy manager of Inspira.

Inspira Oy, a subsidiary of Municipality Finance Plc, offers advice and counselling in various financing issues. It, for instance, provided the economic and financial counselling when the Finnish Transport Agency carried out the procurement process for the highway project between Hamina and Vaalimaa, signed in 2015.

– The negotiations with EIB are very important. We have kept EIB informed and they see the project in positive terms. The background materials will be ready this spring and in 2017 we will learn whether or not EIB can participate in the funding, Mr Lindström says.

The situation in respect of applications and financing has changed since the previous EU application so that now the EU requires that investments which are granted EU funding also include a loan in their financing package. Our purpose is to safeguard the overall financing with government subsidies and loans and submit applications for smaller sums of funding over the entire construction period. Mr Lindström sees the future in a bright light:

–According to our contacts with INEA (EU’s Innovation & Networks Executive Agency), there are many good components in our project which are eligible for EU funding. Furthermore, if we manage to get the overall financing ready before applying for EU funding, the chances are even bigger as the Commission wants to finance so-to-say “safe cases”. This in order to avoid the problems with refunding and also to avoid having resources tied up without being used.

The political will to see this project through is still very strong both in Umeå and in Vaasa, and while the staff in Finland works with having the state funding included in the national budget, the staff in Sweden wishes to involve the Swedish government in the project, in one way or another.

– We hope that also the Swedish government will gradually see the great benefits of this project and the enormous development potential that this infrastructure project brings for our region.

MABA II (Midway Alignment – Botnia Atlantica II)
The aim of the MABA II project is to facilitate future cross-border infrastructure investments in the BA region by producing the necessary background materials. The goal of MABA II is to present, by the end of the project, well-prepared background materials, reports and analyses so that the development process of the east-west transport corridor can continue and the regional, national and EU-level authorities can make decisions regarding future measures and financing. Project duration: 1.9.2016-31.12.2018.
Further information at kvarken.org/projects/maba2

Midway Alignment of the Bothnian Corridor is a joint project of the City of Vaasa in Finland and the City of Umeå in Sweden. The projects aims at binding together the Kvarken region and at strengthening its competitiveness by developing the logistics and the transport of people and goods along the route. A new innovative and environmentally friendly Kvarken ferry is an important part of the project.
Further information at midwayalignment.eu and kvarken.org