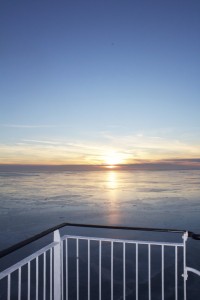 Wasa Express is back in business after an overhaul in Tallinn for two weeks at the turn of the year. The ferry was dry-docked because of the new EU Sulphur Directive stipulating that all ships sailing in the Baltic Sea (as well as in the English Channel and the North Sea) are no longer permitted to use fuels having a sulphur content higher than 0.1%.

As a result, Wasaline decided to change its ship’s fuel from heavy fuel oil to a new oil variant with a low sulphur content, developed by Neste Oil. The upgrade went according to schedule and the interior of the ship was also freshened up at the same time. However, the Sulphur Directive will affect also the ferry’s timetables because the crossing will now take 30 minutes longer than before.

– The ship’s new fuel is 25% more expensive. Therefore, we chose to save fuel by going a bit slower instead of raising the ticket prices for ordinary passengers. The freight costs, on the other hand, were raised in moderation, explains Peter Ståhlberg, the Managing Director of NLC Ferry/Wasaline.

– Wasaline has absolutely amazing employees. With such a motivated and committed staff we can expect another good year and maybe even an increase in our volumes. We have also many new things going on right now, Ståhlberg sums up.

More information about the timetables, theme cruises and other arrangements can be found on the website Wasaline.com