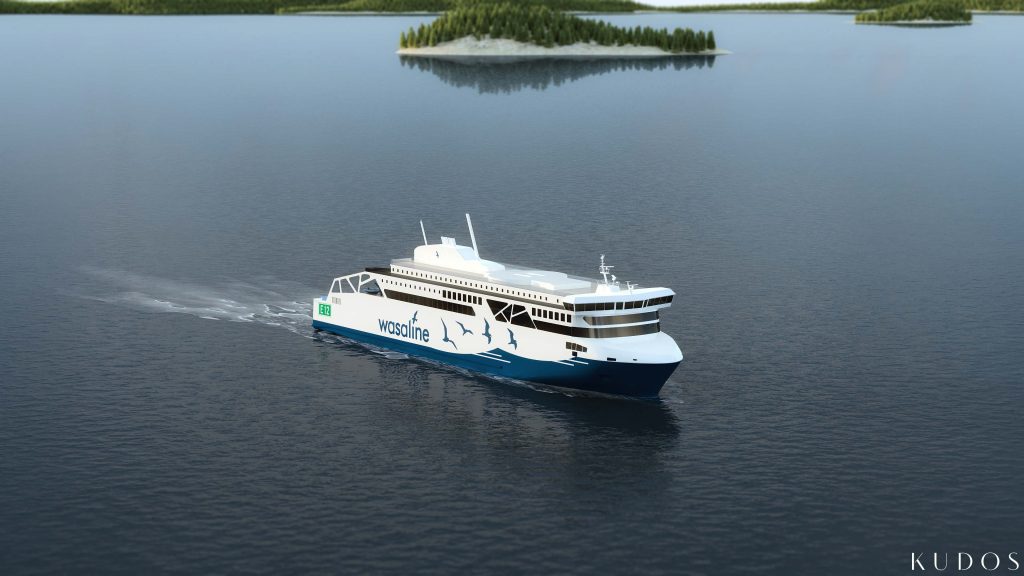 Kvarken Link AB is exploring the conditions for a new ferry for the Kvarken traffic between Vaasa and Umeå. After a comprehensive analysis of the received reports Kvarken Link AB has invited four shipyards to the final round to hand in their binding offers fora new ferry. Three of the shipyards are from Europe and one is from Asia.

– The decision was reached after extensive analysis, says the Chairman of Kvarken Link and Vaasa Mayor Tomas Häyry and continues:
– It feels very satisfying that despite of the extensive analysis we have been able to carry out the design work for the new ferry and at the same time keep the time schedule for the project.

– It is great that we can present a ferry that is designed and suitable for the Kvarken traffic, says the Managing Director at Wasaline Peter Ståhlberg and continues:
– After the delivery of the vessel we can guarantee a continuous traffic with a “green” ferry, which hopefully will be a showcase for our energy cluster. Our passenger and freight volumes shows that we need more capacity for growth in our region. The suppliers need to offer their newest technology to the shipyards and prove the will to get a ship with the latest innovations.

– The time schedule is as follows, says the Managing Director of Kvarken Link Mr Bertil Hammarstedt:
– The information to the four shipyards was carried out in Vaasa on July 10 and 11, 2018.
– The offers from the shipyards must be presented to Kvarken Link Ab at the latest on August 31, 2018.
– Evaluations, clarifications as well as negotiations between the shipyards and financiers will be carried out in September 2018. The aim is to have the contract signed before the turn of the year 2018/2019

The new ferry will be delivered on April 30, 2021. The Finnish Government has promised a support of 25 million Euro and the European lnvestment Bank (EIB) has informed that they will grant the applied loan when the contract with the shipyard is signed, says Bertil Hammarstedt. However, the Government of Sweden is very reserved. Despite the need of the companies in Norrland and the co-operation between the University and the Region for education of Finnish students and medical care, and despite the support from the Midnordic Region the Government of Sweden is showing no interest.
– This is very surprising since the earlier spokesman for political questions concerning traffic issues, nowadays s-group leader for Parliament, Anders Ygeman, criticized the government for being indifferent and demanded measures for ensuring the Kvarken traffic, says Bertil Hammarstedt.